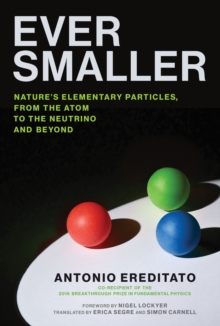 Ideas, theories, experiments, and unanswered questions in particle physics, explained (with anecdotes) for the general reader.The elementary particles of matter hold the secrets of Nature together with the fundamental forces.

In Ever Smaller, neutrino physicist Antonio Ereditato describes the amazing discoveries of the "particle revolution," explaining ideas, theories, experiments, and unanswered questions in particle physics in a way that is accessible (and enjoyable) for the general reader.

Ereditato shows us that physics is not the exclusive territory of scientists in white lab coats exclaiming "Eureka" but that its revelations can be appreciated by any reader curious about the mysteries of the universe. Ereditato's overview takes us through a century of particle physics, from the discovery of the components of the atom through an endless procession of subatomic particles--the pion, the muon, the quarks, the W, Z, gluon, Higgs boson, and the mysterious, ubiquitous neutrino (Ereditato's chosen specialty)--interweaving the history of these discoveries with basic explanations of the physics itself as well as the technology behind the discoveries.

He considers the particle physicist's impulse to pursue the "ever smaller"--to divide matter into ever more minuscule parts, until reaching the elementary constituents of the universe; explains how Nature likes symmetries; describes the workings of particle accelerators and detectors; demonstrates how to distinguish between three identical quarks; and warns that the ugliest experimental data are more important than the most beautiful theory.

With Ever Smaller, Ereditato invites readers to join him in appreciating the beauty of the microcosm.