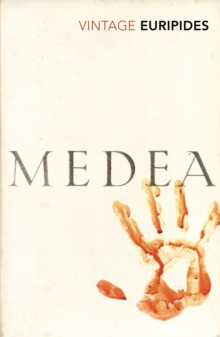 By: Euripides,  Robertson, Robin(Translated by)

THE ACCLAIMED TRANSLATION BY ROBIN ROBERTSON (FORWARD PRIZE, MAN BOOKER PRIZE SHORTLIST 2018)Euripides' Medea, the brutally powerful ancient Greek tragedy that reverberates down the centuries, has been brought to fresh and urgent life by one of our best modern poets. Medea has been betrayed. Her husband Jason has left her for a younger woman. He has forgotten all the promises he made and is even prepared to abandon their two sons.

But Medea is not a woman to accept such disrespect passively.

Strong-willed and fiercely intelligent, she turns her formidable energies to working out the greatest, and most horrifying, revenge possible... Suitable for the general reader as well as for students and performers. 'In Robertson's lucid, free-running verse, Medea's power is released into the world, fresh and appalling, in words that seem spoken for the first time' Anne Enright'This version of Medea is vivid, strong, readable and brings triumphantly into modern focus the tragic sensibility of the ancient Greeks' John Banville'Robertson's achievement is to make the dialogue flow without losing the unsettling poetry of the original' Financial Times