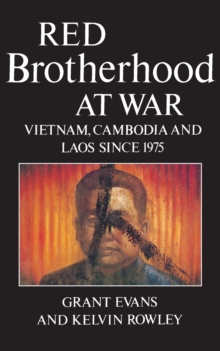 Red Brotherhood at War : Vietnam, Cambodia and Laos Since 1975

This fully updated edition of Red Brotherhood at War - the most comprehensive account of events since 1975 in Indochina - explains why communist victory did not usher in a period of peace based on proletarian internationalism.

While victorious revolutionaries in Vietnam and Laos strengthened their special relationship, Vietnam's relations with fraternal Cambodia and China deteriorated into full-scale war.

The Vietnamese overthrow of Pol Pot's regime in 1979 was condemned by the West, which joined with China to support the Khmer Rouge-dominated anti-Vietnamese resistance in Cambodia.

An inter-communist war thus became one of the focal points of the New Cold War in the 1980s.

This complex and paradoxical tangle of events is skilfully analysed by Evans and Rowley in their frank and lively book.

Drawing on a wide range of sources and first-hand research, this new edition has been thoroughly revised to chart the interaction between Vietnam, Cambodia and Laos and the changing configuration of regional and great-power politics up to the present day.