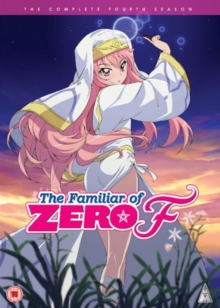 The Familiar of Zero: Series 4 Collection

All 12 episodes from the fourth series of the Japanese anime featuring the voice talents of Rie Kugimiya and Satoshi Hino.

The story follows Louise (Kugimiya), a young girl who tries but fails to perform successful magic.

Nicknamed 'Zero Louise' by children at her school, she is forced by her peers to use a special ritual to summon a familiar, an eternal protector and partner in the world of magic.

In this series, Louise is sent to the Pope of Romalia, Vittoria (Shinnosuke Tachibana), by Queen Henrietta (Ayako Kawasumi) where she and Tiffania (Mamiko Noto) agree to become holy maidens.

The episodes are: 'Louise of the Holy Ground', 'Aquileia's Shrine Maiden', 'The Incompetent King Gone Mad', 'The Queen's Reward', 'The Maidens of De Ornielle', 'Trouble at the Outdoor Bath', 'Elves from the Desert', 'Escape Through the Sewer', 'Tabitha's Coronation', 'The Awakening of Calamity', 'Louise's Choice' and 'The Familiar of Zero'.