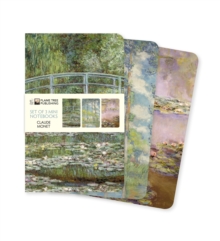 By: Flame Tree Studio(Created by)

Claude Monet Mini Notebook Collection features a set of three mini, foiled and ruled notebooks, each with a different beautiful design - Waterlillies, Bridge over a Pond of Water Lilies and The Poplars.

With a sturdy cover and rounded corners, they are perfect to be carried everywhere!Claude Monet was an extremely insightful and experimental artist, from his first inklings as an Impressionist to his later flirtations with Abstract Expressionism.

Towards the end of his life and much inspired by Japanese water gardens, Monet spent a great deal of time in his beloved Giverny.

Adorned with poppies, blue sage, dahlias and irises, the waters were disturbed only by bamboos and water lilies.

His water garden was originally created to satisfy a need to be near water, and to provide a visual feast that could be enjoyed from his house.

Its famous green wooden footbridge was built across the water and it became the central focus of many of his works.

He said, 'It took me some time to understand my water lilies.

I planted them for pleasure.' and so he began to work on what is probably the most famous series of paintings the world has ever seen. Flame Tree: The Art of Fine Gifts.