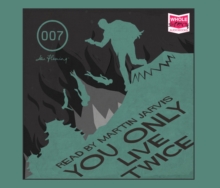 You Only Live Twice

By: Fleming, Ian,  Jarvis, Martin(Read by)

Shattered by the death of his wife at the hands of Blofeld, Bond has gone to pieces.

M sends Bond to Japan for one last, near-impossible mission.

But Japan proves to be Bond's downfall, leading him to a mysterious residence known as the 'Castle of Death' where he encounters an old enemy revitalized.

All the omens suggest that this is the end for the British agent, and for once, even Bond himself seems unable to disagree...