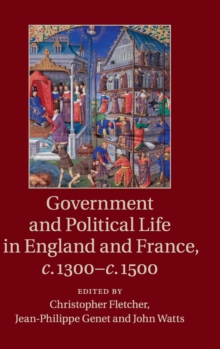 How did the kings of England and France govern their kingdoms?

This volume, the product of a ten-year international project, brings together specialists in late medieval England and France to explore the multiple mechanisms by which monarchs exercised their power in the final centuries of the Middle Ages.

Collaborative chapters, mostly co-written by experts on each kingdom, cover topics ranging from courts, military networks and public finance; office, justice and the men of the church; to political representation, petitioning, cultural conceptions of political society; and the role of those excluded from formal involvement in politics.

The result is a richly detailed and innovative comparison of the nature of government and political life, seen from the point of view of how the king ruled his kingdom, but bringing to bear the methods of social, cultural and economic history to understand the underlying armature of royal power.