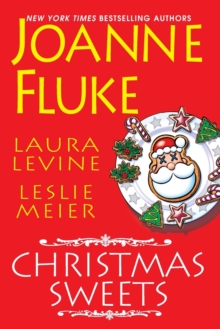 THE TWELVE DESSERTS OF CHRISTMAS by JOANNE FLUKE
It's the perfect mix of naughty and nice when two lovestruck boarding school teachers watch six kids over Christmas break. But when someone wants the cozy couple's romance to burn out faster than a scorched fruitcake, it's Hannah Swensen to the rescue, armed with her sleuthing
skillsand twelve deliciously festive recipes . . .

NIGHTMARE ON ELF STREET by LAURA LEVINE
Aside from the mortifying costume, how bad can a gig as a mall Santa's elf be? Jaine Austen finds out when she's teamed up with the Santa from Hell. But things go from bad to worse when he's found murdered on the joband Jaine is a suspect. Now all she wants for Christmas is to find the real killer . . .

THE CHRISTMAS THIEF by LESLIE MEIER
Elizabeth Stone is ready for a white Christmas in Tinker's Cove, Maineuntil a fancy Yule ball at the Florida hotel where she works dumps snow on her plans. The sponsor's jewels have gone missing and the police are asking about her ties to a cute mystery guest. Good thing Elizabeth's mother, Lucy Stone, flew down to surprise her. Tis the season for a little investigating . . .