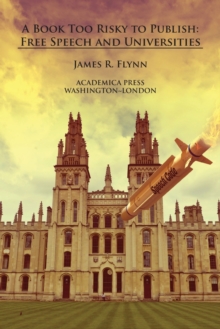 A book too risky to publish : free speech and universities

Traditionally, our society has broadly agreed that the "good university" should teach the intellectual skills students need to become citizens who are intelligently critical of their own beliefs and of the narratives presented politicians, society, the media, and, indeed, universities themselves.

The freedom to debate is essential to the development of critical thought, but on university campuses today free speech is increasingly restricted for fear of causing "offense." In this daring and intrepid book, which was originally withdrawn from publication by another publisher but is now proudly presented by Academica Press, the famous intelligence researcher James R.

Flynn presents the underlying factors that have circumscribed the range of ideas now tolerated in our institutions of learning.

A Book Too Risky To Publish concludes that few universities are now living up to their original mission to promote free inquiry and unfettered critical thought.

In an age marred by fake news and ever increasing social and political polarization, this book makes an impassioned argument for a return to critical thought in our institutions of higher education.