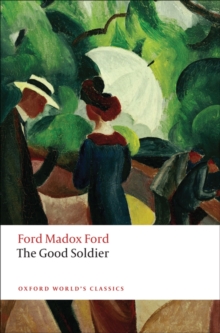 The good soldier : a tale of passion

'This is the saddest story I have ever heard.'Wealthy American John Dowell describes in a disarmingly casual, compellingly intimate manner how he and his wife Florence meet an English couple in a German spa resort.

They become friends over the years and gradually the history of their relationships and the passions that lie behind the orderly Edwardian facade are unveiled. Dowell is the archetypal 'unreliable narrator', and his casual revelations are both unexpected and explosive.

A masterpiece of early Modernism and a virtuoso performance of literary skill, Ford's 'Tale of Passion' reflects contemporary interests in psychology, sexuality, and the New Woman.

Its portrayal of the destruction of a civilized elite anticipates the cataclysm of the First World War, which erupted while Ford was finishing the book. This new edition includes Ford's important essay 'On Impressionism', which sheds valuable light on his artistic technique.