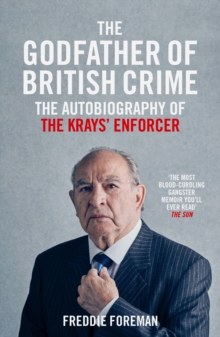 The godfather of British crime

To Britain's criminal underworld, Freddie Foreman is the Godfather.

Held responsible for the gangland killings of Ginger Marks and Frank 'The Mad Axeman' Mitchell, he was the punisher to those who broke the underworld's strict code of conduct. Foreman's dramatic kidnap and arrest for Britain's biggest cash robbery made headlines around the world, yet this daring raid was just the peak of the safe-blowing, bank-robbing career that spanned decades.

His story is a fascinating, yet chilling account of life as a freelance enforcer for the Kray twins, and as London's most feared gangster.

Bloodshed aside, Freddie's often humorous stories reveal a caring man who believes that violence is a last resort and who always treated people with respect.

Revealed in these pages are the amazing details of the heists, the double crossings, the shoot-outs and the betrayals that accompanied life as a career criminal when the streets were controlled by fear.

Exposed are the audacious plans behind the century's most famous crimes, the damning evidence of police corruption and the eye-opening events that gave Freddie this most revered reputation.