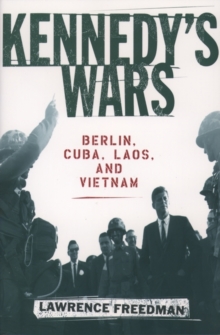 In his thousand-day presidency, John F. Kennedy led America throuh one of its most difficult and potentially explosive areas.

With the Cold War at its height and the threat of communist advances in Europe and the Third World, Kennedy had the unenviable task of maintaining US solidarity without leading the western world into a nuclear catastrophe.

In 'Kennedy's Wars', noted historian Lawrence Freedman draws on the best of Cold War scholarship and newly released government documents to illuminate Kennedy's approach to war and his efforts for peace.

He recreates insightfully the political and intellectual milieu of the foreign policy establishment during Kennedy's era with vivid profiles of his top advisors - Robert McNamara, Dean Rusk, Robert Kennedy - and influential figures such as Dean Acheson and Walt Rostow.

Tracing the evolution of traditional liberalism into the Cold War liberalism of Kennedy's cabinet, Freedman evaluates their responses to the tensions in Berlin, Cuba, Laos, and Vietnam.

He gives each conflict individual attention, showing how foreign policy decisions came to be defined for each new crisis in the light of those that had gone before. Readers will follow Kennedy as he wrestles with the succession of major conflicts - taking advice, weighing the risks of inadvertently escalating the Cold War into outright military confrontation, exploring diplomatic options, and forming strategic judgements that would eventually prevent a major war during his presidency. 'Kennedy's Wars' offers a dynamic and human portrait of Kennedy under pressure: a political leader shaped by the ideas of his time, conscious of his vulnerability to electoral defeat but also of his nation's vulnerability to nuclear war.

Military and Kennedy enthusiasts will find its balanced consideration of the president's foreign policy and provocative 'what if' scenarios invaluable keys to understanding his accomplishments, failures, and enduring legacy.