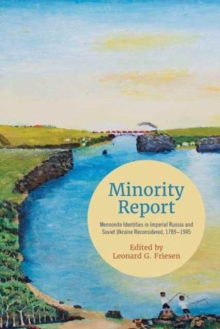 By: Friesen, Leonard G.(Edited by)

Part of the Tsarist and Soviet Mennonite studies series

The history of the Black Sea littoral, an area of longstanding interest to Russia, provides important insight into Ukraine as a contemporary state.

This volume engages scholars from Ukraine, Russia, and North America, and includes translated and accessible contributions by scholars from the Ukrainian-German Institute of Dnipropetrovsk State University.

An appendix is included which recounts for the first time the emergence of Mennonite public history in southern Ukraine after the collapse of the Soviet Union.

The volume's contributors reveal that far from being isolated from the larger society, Mennonites played an integral role in shaping the entire region. Minority Report successfully places Mennonite history within the recent historiographical insights offered by Ukrainian and Russian scholars and significantly enriches our understanding of minority relations in Soviet Ukraine.