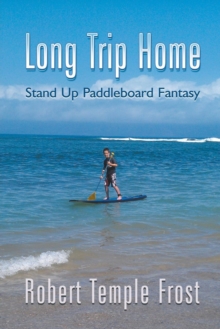 Akoni and Micah are two brothers who live in Lahaina, on the Hawaiian island of Maui.

Akoni is the older and has a standup paddleboard that Micah likes to ride on while his brother paddles.

After teaching Micah to paddle, Akoni has an idea to modify an ocean-going kayak into a standup paddle kayak so the two brothers can paddle across the seven-mile wide channel that separates Maui from Molokai, where their grandmother lives.

With their kayak modified and their parents' permission granted, the boys embark on their journey.

Helped along their way by gentle trade winds, the brothers encounter playful dolphins and have a too-close encounter with an enormous passenger liner.

However they arrive on Molokai safely and are warmly welcomed by their grandmother.

Visiting their grandmother on Molokai, the boys learn things about their family and their Hawaiian heritage they'd never known before.

Inspired by their newfound understanding of their familial and cultural heritage, they strike out across the channel for home.

But this time the going is treacherous. Strong winds and currents force them out into open sea. The boys' pleasant journey becomes a struggle for survival as Micah and Akoni unexpectedly find themselves on a Long Trip Home.

Although a "mainlander" author Robert Temple Frost loves Hawaii and Maui in particular.

Now retired after 37 years as a research lab administrator, Robert is the author of two previous self-published works, The Knowers - First Move and The Knowers - Second Move.

His first novel, Okinawan Adventure, was published by Charles E.

Tuttle back in 1958. Photo of Ryan Feinan on Front cover taken by author.