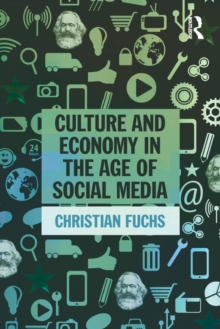 Culture and economy in the age of social media

Understanding social media requires us to engage with the individual and collective meanings that diverse stakeholders and participants give to platforms.

It also requires us to analyse how social media companies try to make profits, how and which labour creates this profit, who creates social media ideologies, and the conditions under which such ideologies emerge.

In short, understanding social media means coming to grips with the relationship between culture and the economy.

In this thorough study, Christian Fuchs, one of the leading analysts of the Internet and social media, delves deeply into the subject by applying the approach of cultural materialism to social media, offering readers theoretical concepts, contemporary examples, and proposed opportunities for political intervention. Culture and Economy in the Age of Social Media is the ultimate resource for anyone who wants to understand culture and the economy in an era populated by social media platforms such as Twitter, Facebook, and Google in the West and Weibo, Renren, and Baidu in the East.

Updating the analysis of thinkers such as Raymond Williams, Karl Marx, Ferruccio Rossi-Landi, and Dallas W.

Smythe for the 21st century, Fuchs presents a version of Marxist cultural theory and cultural materialism that allows us to critically understand social media's influence on culture and the economy.