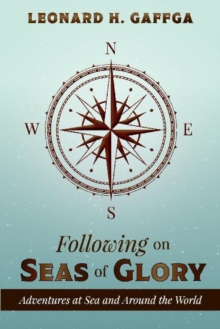 Following on Seas of Glory : Adventures at Sea and Around the World

The story begins with a talented young man who invented and patented a marine engine around 1900 which began a maritime tradition in the family which would span three generations.

The story moves to the youngest of his three sons who has a yearning to venture out on the sea.

He fulfills this desire by attending the New York State Merchant Marine Academy where he makes a transatlantic voyage on the school ship SS Newport, a three masted sailing ship in 1924.

There are storms but a safe arrival home.Finally, the third generation of men in this family graduates from college but makes an abrupt decision to join the Navy instead of attending law school.

His exploits in the Navy include graduating from Naval Justice School, a fate he tried to avoid, and then serving as personnel and legal officer at a small communication station on the island of Guam in the mid 1960s.

He continues searching for his dream by landing a seagoing assignment on an aircraft carrier headed for Viet Nam, working in the Combat Information Center (CIC) tracking live enemy contacts, and finally completing a circumnavigation of the world by traveling west across the South China Sea to Cape Town, SA and then home, traveling northwest across the Atlantic Ocean.He completes his active duty service with a new job on the aircraft carrier and a deployment to the Mediterranean Sea.Although he thought he was done with the military when he was discharged from active duty in 1968, that was not to be the case.

Through a strange twist of fate, the young man begins to realize that his attachment to the Navy and the maritime life is more permanent than he realized and he continues in the Reserves for 21 more years collecting some very powerful experiences a long the way such as a close call with an angry mob in Rome and the sinking of a Navy destroyer on the Island of Rhodes.

Just as there is a wider ocean that extends beyond the shore, there is understanding that lets us see beyond ourselves.