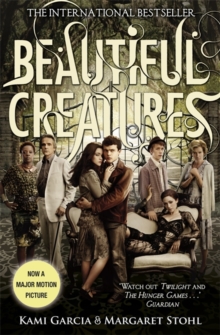 This edition ties in to the major new Warner Brothers and Alcon Entertainment blockbuster film starring Emma Thompson, Jeremy Irons, Alice Englert and Alden Ehrenreich. In Ethan Wate's hometown there lies the darkest of secrets . . . There is a girl. Slowly, she pulled the hood from her head. Green eyes, black hair. Lena Duchannes. There is a curse. On the Sixteenth Moon, the Sixteenth Year, the Book will take what it's been promised. And no one can stop it. In the end, there is a grave. Lena and Ethan become bound together by a deep, powerful love.

But Lena is cursed and on her sixteenth birthday, her fate will be decided. Ethan never even saw it coming. Praise for Beautiful Creatures:'Watch out Twilight and Hunger Games' - The Guardian'Move over Twilight, there's a new supernatural saga in town.' - E!'This novel has been generating Twilight-level buzz.' - Teen Vogue About the authors:@kamigarcia is a superstitious American southerner who can make biscuits by hand and pies from scratch!

She lives in Los Angeles, California with her family. @mstohl has written and designed many successful video games, which is why her two beagles are named Zelda and Kirby.

She has degrees from Yale and Stanford Universities in the US and has also studied in the prestigious creative writing department at UEA, Norwich. She lives in Santa Monica, California with her family. www.beautifulcreaturesthebook.comAlso available in the Beautiful Creatures series: Beautiful Darkness, Beautiful Chaos and Beautiful Redemption. *Don't miss the brand new DANGEROUS CREATURES series, set in the world of Beautiful Creatures*Exclusive ebook novellas also available:Dream DarkDangerous Dream