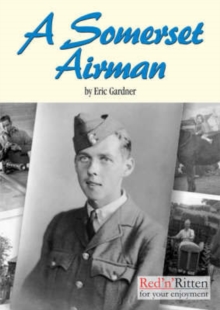 Autobiography of a country lad's life immediately before and during the war in the RAF as an armourer in UK and Canada.

Eric Gardner grew up in Frome on a small family farm.

The Introduction to this book is his account of the farm itself, daily routines and the animals with which he shared his childhood, and paints an engaging picture of rural life in 1930's Somerset.

At the age of 19 he joined the RAF. His witty observations of day-to-day life as an Airman in wartime Britain and Canada give a fascinating insight into the life experienced by many ordinary men and women, from all backgrounds, who were brought together by World War Two.

Like many of his generation, Eric Gardner did not receive a higher education, and was unable to fulfill his obvious potential.

In later life he often commented that the RAF had been his university.

Eric thought his wartime experiences would be of little interest to anyone else, because he did not see any active service.

His family did not agree and encouraged him to commit his memories to paper.

He finished the manuscript for "A Somerset Airman" just days before his sudden death at the age of 82 and so, sadly, Eric never saw it in print.