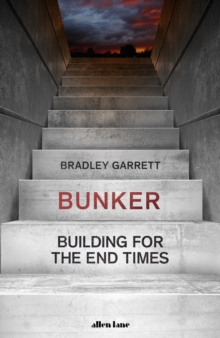 Bunker : building for the end times

'An extraordinary achievement . . . gripping, grim and witty' Robert MacFarlane'A kind of apocalyptic Super Size Me, in which the author force feeds himself a steady diet of paranoia, conspiracy, eschatology and end-times architecture' The GuardianToday, the bunker has become the extreme expression of our greatest fears: from pandemics to climate change and nuclear war. And once you look, it doesn't take long to start seeing bunkers everywhere. In Bunker, acclaimed urban explorer and cultural geographer Bradley Garrett explores the global and rapidly growing movement of 'prepping' for social and environmental collapse, or 'Doomsday'.

From the 'dread merchants' hustling safe spaces in the American mid-West to eco-fortresses in Thailand, from geoscrapers to armoured mobile bunkers, Bunker is a brilliant, original and never less than deeply disturbing story from the frontlines of the way we live now: an illuminating reflection on our age of disquiet and dread that brings it into new, sharp focus. The bunker, Garrett shows, is all around us: in malls, airports, gated communities, the vehicles we drive.

Most of all, he shows, it's in our minds.