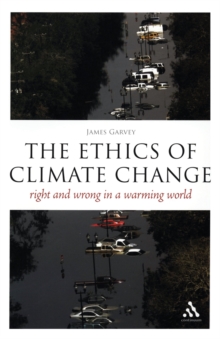 The ethics of climate change : right and wrong in a warming world

Part of the Think Now series

The debate about the existence of climate change seems finally at an end.

We now have to decide what to do about it. Here, James Garvey argues that the ultimate rationale for action on climate change cannot be simply economic, political, scientific or social, though no doubt our decisions should be informed by such things.

Instead, climate change is largely a moral problem. What we should do about it depends on what matters to us and what we think is right.This book is an introduction to the ethics of climate change.

It considers a little climate science and a lot of moral philosophy, ultimately finding a way into the many possible positions associated with climate change.

It is also a call for action, for doing something about the moral demands placed on both governments and individuals by the fact of climate change.

This is a book about choices, responsibility, and where the moral weight falls on our warming world.Articulate, provocative and stimulating, this timely book will make a significant contribution to one of the most important debates of our time."Think Now" is a brand new series of stimulating and accessible books examining key contemporary social issues from a philosophical perspective.

Written by experts in philosophy, these books offer sophisticated and provocative yet engaging writing on political and cultural themes of genuine concern to the educated reader.