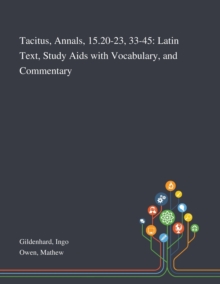 Saint Philip Street Press
1013284445 / 9781013284441
Paperback / softback
09/10/2020
Usually dispatched within 4 weeks
216 x 279 mm, 649 grams 278 pages
General (US: Trade)  Learn More
The emperor Nero is etched into the Western imagination as one of ancient Rome's most infamous villains, and Tacitus' Annals have played a central role in shaping the mainstream historiographical understanding of this flamboyant autocrat.This section of the text plunges us straight into the moral cesspool that Rome had apparently become in the later years of Nero's reign, chronicling the emperor's fledgling stage career including his plans for a grand tour of Greece; his participation in a city-wide orgy climaxing in his publicly consummated 'marriage' to his toy boy Pythagoras; the great fire of AD 64, during which large parts of central Rome went up in flames; and the rising of Nero's 'grotesque' new palace, the so-called 'Golden House', from the ashes of the city. This building project stoked the rumours that the emperor himself was behind the conflagration, and Tacitus goes on to present us with Nero's gruesome efforts to quell these mutterings by scapegoating and executing members of an unpopular new cult then starting to spread through the Roman empire: Christianity.All this contrasts starkly with four chapters focusing on one of Nero's most principled opponents, the Stoic senator Thrasea Paetus, an audacious figure of moral fibre, who courageously refuses to bend to the forces of imperial corruption and hypocrisy.This course book offers a portion of the original Latin text, study aids with vocabulary, and a commentary. Designed to stretch and stimulate readers, Owen's and Gildenhard's incisive commentary will be of particular interest to students of Latin at both A2 and undergraduate level. It extends beyond detailed linguistic analysis and historical background to encourage critical engagement with Tacitus' prose and discussion of the most recent scholarly thought.

This work was published by Saint Philip Street Press pursuant to a Creative Commons license permitting commercial use. All rights not granted by the work's license are retained by the author or authors.