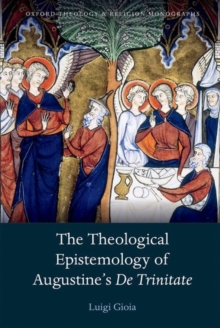 Part of the Oxford Theology and Religion Monographs series

Luigi Gioia provides a fresh description and analysis of Augustine's monumental treatise, De Trinitate, working on a supposition of its unity and its coherence from structural, rhetorical, and theological points of view.

These topics hold a predominantly instructive or polemical function.

The unity and the coherence of the treatise become apparent especially when its description focuses on a truly theological understanding of knowledge of God:Augustine aims at leading the reader to the vision and enjoyment of God the Trinity, in whose image we are created.

This mystagogical aspect of the rhetoric of De Trinitate is unfolded through Christology, soteriology, doctrine of the Holy Spirit and doctrine of revelation.

At the same time, from the vantage point of love, Augustine detects and powerfully depicts the epistemological consequences of human sinfulness, thus unmasking the fundamental deficiency of received theories of knowledge. Only love restores knowledge and enables philosophers to yield to the injunction which resumes philosophical enterprise as a whole, namely 'know thyself'.