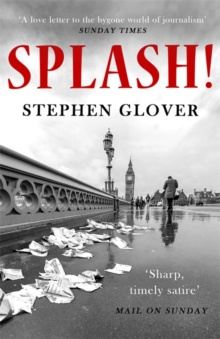 'I thoroughly enjoyed Splash! It's a delicious confection of excellent plotting, an inventively bonkers cast of characters, subtle insights into the world of newspapers and a satisfying ending which invokes the great Evelyn Waugh's masterpiece, Scoop.

A fine comedy of manners by a writer who knows the media inside out' BEL MOONEYSam Blunt is a drunken, broken-down tabloid reporter, working for a once-mighty newspaper struggling to come to terms with the digital age.

With the assistance of Benedict, an earnest though clever wet-behind-the-ears young intern on the paper, Sam grapples to uncover the story of the century which reveals the political corruption and cynicism at the heart of a rotten Establishment. As they try to nail the story amid a series of capers, Sam and Benedict are frustrated by the self-serving proprietor of the Daily Bugle, various self-appointed do-gooders who want to rein in the Press, and Trevor Yapp, the malign and untrustworthy editor of Bugle Online.

Splash! is a satire of the Press and politics in a modern London peopled by a Chinese billionaire would-be press proprietor, a worldly bishop, neglected immigrants, a corrupt and plaintive Prime Minister, and journalists who are often most interested in doing one another down. Yet however self-serving newspapers may sometimes be, Sam and Benedict are ultimately on the side of the angels as they battle to write their triumphant story.