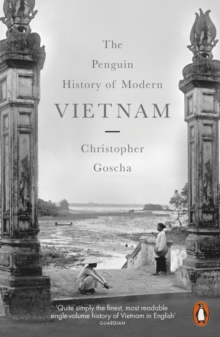 The Penguin history of modern Vietnam

FAIRBANK PRIZESHORTLISTED FOR THE CUNDHILL HISTORY PRIZE 2017'This is the finest single-volume history of Vietnam in English.

It challenges myths, and raises questions about the socialist republic's political future' Guardian'Powerful and compelling.

Vietnam will be of growing importance in the twenty-first-century world, particularly as China and the US rethink their roles in Asia.

Christopher Goscha's book is a brilliant account of that country's history.' - Rana Mitter'A vigorous, eye-opening account of a country of great importance to the world, past and future' - Kirkus ReviewsOver the centuries the Vietnamese have beenboth colonizers themselves and the victims of colonization by others.

Their country expanded, shrunk, split and sometimes disappeared, often under circumstances far beyond their control.

Despite these often overwhelming pressures, Vietnam has survived as one of Asia's most striking and complex cultures. As more and more visitors come to this extraordinary country, there has been for some years a need for a major history - a book which allows the outsider to understand the many layers left by earlier emperors, rebels, priests and colonizers.

Drawing on a lifetime of thinking about Indo-China, he has created a narrative which is consistently seen from 'inside' Vietnam but never loses sight of the connections to the 'outside'.

As wave after wave of invaders - whether Chinese, French, Japanese or American - have been ultimately expelled, we see the terrible cost to the Vietnamese themselves.

Vietnam's role in one of the Cold War's longest conflicts has meant that its past has been endlessly abused for propaganda purposes and it is perhaps only now that the events which created the modern state can be seen from a truly historical perspective. Christopher Goscha draws on the latest research and discoveries in Vietnamese, French and English.

His book is a major achievement, describing both the grand narrative of Vietnam's story but also the byways, curiosities, differences, cultures and peoples that have done so much over the centuries to define the many versions of Vietnam.