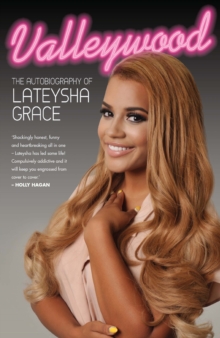 Valleywood : the autobiography of Lateysha Grace

Since exploding on to our screens as part of the MTV show The Valleys, diva Lateysha Grace has caused quite a stir with her kick-offs, cat-fights and confident Beyonce-like behaviour.

But before all the glamour, Lateysha had a bleak childhood; born into a single parent family where her mother Debbie struggled to make ends meet, plunging the family into the depths of abject poverty. All Lateysha craved was a normal family life and when her mum met a new man, she was happy to finally have a father figure.

Her dream soon turned into her worst nightmare though when her new dad became addicted to heroin - the man she thought was her knight in shining armour had turned out to be the 'devil incarnate'.

Lateysha could do nothing but watch as he physically abused her, her mother and her siblings. Lateysha's story is shocking, upsetting and often heart-breaking and she holds no bars when it comes to speaking about her turbulent childhood, wild behaviour and emotional despair.The devastating effects of her traumatic youth came to the surface when, as a teenager, Lateysha attempted to take her own life twice and found solace in drugs, alcohol and casual sex as a way of dealing with her problems. Even her time on The Valleys almost never happened after Lateysha was charged with assault on a girl in a local nightclub.

Eventually, the Welsh beauty was found not guilty, but this drama just added to the long list of harrowing events in her young life.

With deep valleys of heartache and peaks of joy, Lateysha's bonk-busting autobiography will have you scrambling to turn the page.