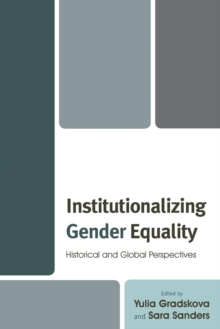 Forty years have passed since the first UN-organized World Conference on Women in Mexico City in 1975.

In that time, women's rights, and later gender equality, have become firmly established as an important area of global politics and human rights.

What shape have these processes taken in different parts of the world?

How do global and internationally designed institutions adapt to local cultural, religious, political, and economic contexts?

What are the problems and contradictions embedded in this process when viewed from a global perspective?

What effects do grassroots, local, and national actors have on transnational institutions?

In answering the questions, the book draws on historical and global perspectives, beginning in the 1960s, an important moment for internationalization during the Cold War, and looking to a global selection of case studies. Providing a series of "snapshots" of historical and contemporary global gender equality politics, the chapters allow for an examination of how local, national, and transnational actors have interacted in ways that affect the dissemination of gender equality institutions, both formal and informal. The case studies demonstrate the relationship between the supranational, regional, national, and sub-national or "local." They explore the power dynamics, interactions, and mutually constituting nature of two analytic levels of organizations and actors involved in the institutionalization of gender equality-the transnational level as well as the level of activity within specific national political systems (as represented by states, grassroots organizations, and other sub-national actors).

The findings reveal that the institutionalization of gender equality is dependent on national and local context, the potential for interactions between gender equality policies and other state agendas, the depth of informal institutions, and the degree to which a given state is integrated into the norms of the international system.