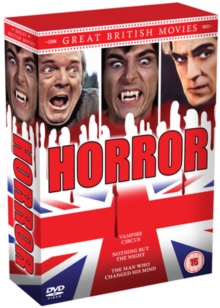 Collection of three British horror films. In 'Nothing But the Night' (1973), Christopher Lee and Peter Cushing star as a police officer and a psychiatrist who work together to try and get to the bottom of strange happenings on a remote Scottish island.

The island is home to an orphanage that comes to the attention of police colonel Charles Bingham (Lee) when three of its trustees are found dead in a short space of time.

Though initial evidence suggests that the deaths were suicides, Bingham is suspicious and enlists the help of Sir Mark Ashley (Cushing) to try and solve the mystery.

In 'Vampire Circus' (1972), an itinerant circus arrives in a small village, causing the villagers to rejoice at the prospect of entertainment to relieve the burden of years of plague.

This plague, superstitious locals believe, is the result of a curse from Count Mitterhouse (Robert Tayman), a vampire.

But shortly after the circus's arrival the children of the village start to die in mysterious circumstances.

In 'The Man Who Changed His Mind' (1936), Boris Karloff stars as a scientist warped by the power he gains from one of his own discoveries.

When Dr Laurience (Karloff) retires to an isolated house to research the origins of the human mind and soul with a surgeon, Clare (Anna Lee), and a man confined to a wheelchair, Clayton (Donald Calthrop), he is scorned by his scientific peers.

However, Laurience succeeds in discovering a means of mind-transference: the ability to swap the mental faculties of any two people and thus to take possession of the bodies of others.

But will he use the power wisely?