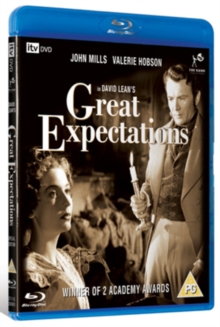 David Lean directs this classic adaptation of Dickens's novel about a young orphan who develops 'great expectations' after a mysterious benefactor pledges to sponsor his transformation into a gentleman.

Pip (Anthony Wager) is visiting the graves of his deceased parents when he finds himself confronted by an escaped convict, Magwitch (Finlay Currie).

Unfortunately for Pip, Magwitch isn't the only frightening adult he becomes acquainted with.

When Miss Havisham (Martita Hunt), an eccentric old woman still dressed for the wedding at which she was abandoned by her groom years ago, seeks a playmate for her charge, Estella (Jean Simmons), it is Pip who is sent for.

The boy quickly falls in love with Estella, though his hopes seem forlorn due to the gap in social standing between the two.

When an older Pip (John Mills) discovers that he has a benefactor, he feels that Estella may be won, but has he read the situation correctly?