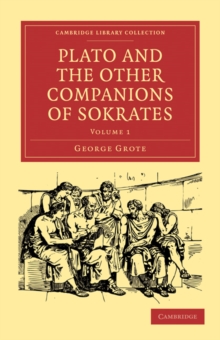 Plato and the Other Companions of Sokrates

Best known for his influential History of Greece, the historian and politician George Grote (1794-1871) wrote this account of Plato's dialogues as a philosophical supplement to the History.

This first volume focuses on Plato's early and transitional dialogues, all of which feature Socrates.

It also includes a preface to the whole project which discusses the meaning and importance of philosophy itself, and extensive introductory material on pre-Socratic philosophy, the life of Plato and history of the Platonic canon.

With three volumes each running to over six hundred pages, Grote's scholarship is formidably comprehensive.

The publication of Plato and the Other Companions of Sokrates confirmed him as one of the greatest authorities on Plato in the nineteenth century.