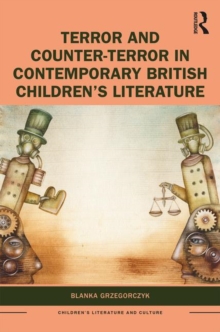 Part of the Children's Literature and Culture series

The widespread threat of terrorist and counter-terrorist violence in the twenty-first century has created a globalized context for social interactions, transforming the ways in which young people relate to the world around them and to one another.

This is the first study that reads post-9/11 and 7/7 British writing for the young as a response to this contemporary predicament, exploring how children's writers find the means to express the local conditions and different facets of the global wars around terror.

The texts examined in this book reveal a preoccupation with overcoming various forms of violence and prejudice faced by certain groups within post-terror Britain, as well as a concern with mapping out their social relations with other groups, and those concerns are set against the recurring themes of racist paranoia, anti-immigrant hostility, politicized identities, and growing up in countries transformed by the effects of terror and counter-terror.

In doing so, this study maps new connections for scholars, students, and readers of contemporary children's fiction who are interested in how such writing addresses some of the most pressing issues affecting us today, including survival after terror, migration, and community building.