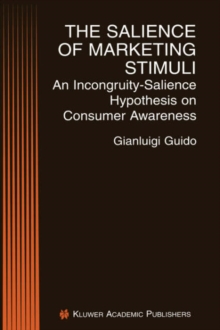 The Salience of Marketing Stimuli : An Incongruity-Salience Hypothesis on Consumer Awareness

In consumer and social psychology, salience has been generally treated as an attribute of a stimulus, which allows it to stand out and be noticed.

Using schema theory and an information processing approach, the model introduced here - briefly referred to as the In-salience hypothesis emphasizes the nature of prominence which is intrinsic to any salience construct reviewed in literature.

This model is part of wider Dichotic theory of salience, according to which a stimulus is salient either when it is incongruent in a certain context to a perceiver's schema, or when it is congruent in a certain context to a perceiver's goal. According to the four propositions of the model, in-salient stimuli are better recalled, affect both attention and interpretation, and are moderated by the degree of perceivers' comprehension (i.e., activation, accessibility, and availability of schemata), and involvement (i.e., personal relevance of the stimuli).

Results of two empirical studies on print advertisements show that in-salient ad messages have the strongest impact in triggering ad processing which, in turn, leads to consumer awareness.

The reading of this book is therefore recommended not only to academic scholars, but also to marketers especially planning ad campaigns and launches of new products.