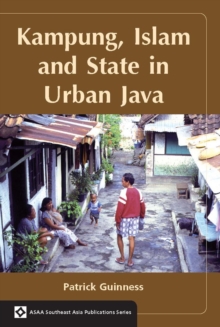 The nature of community in urban Java changed dramatically during the economic and political transition that followed the fall of the Soeharto regime in Indonesia, although the community continues to provide a rallying point for urban low-income residents in the off-street neighbourhoods (kampong) in Yogyakarta and in other cities of Java.

Under Soeharto, kampung residents both cooperated in the supervision of their lives by the state and explored forms of sociality that gave some protection from collusion with the state.

With the demise of the New Order and the rise of policies promoting decentralisation, urban society changed under the impact of political reform, globalisation, global and local patterns of consumerism, and kampung expression of community.

Patrick Guinness, who began studying the kampung settlements of Yogyakarta more than 30 years ago, examines these processes in terms of economic, political and ritual patterns, and from the perspectives of kampung leaders and entrepreneurs, kampung youth, formal and casual labour, and NGO volunteers working in these neighbourhoods.

Where community was once examined on the basis of romantic and mistaken assumptions about the homogeneity and compactness of what are often disparate collections of neighbours, it has been seen more recently as a construction of the nation-state in its bid to control and develop its citizens, as a construction of the local populace in their negotiations with or opposition to the state, and as a mechanism enabling local residents to cope with the pressure of state and market demands on them.