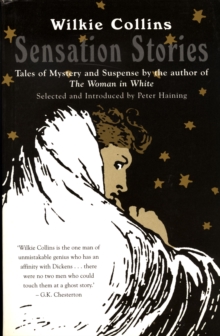 The "Sensation Novel" ushered in the modern mystery genre.

It was inaugurated by Wilkie Collins's best-seller The Woman in White in 1860.

But this collection, selected by Peter Haining, reveals that Collins had actually been writing realistic stories of suspense for at least a decade before this.

With dramatic plots that revolved around hidden secrets, bloody crimes, villainous schemes, and clever detective work all occurring in everyday settings, Wilkie Collins helped to shape a new genre that was worlds away from anything being written by his contemporaries--and one that was to have a far-reaching influence.

Sensation Stories ranges from Collins's earliest tales and those published under the auspices of his great friend Charles Dickens to the title piece from his last, melancholic collection.

Among several famous yarns and stories not published for over a hundred years is one featuring a pioneer female detective and another that has been called the first British detective story.

There is a ghost story controversial for its eroticism, the first humorous or satirical detective story and a story that clearly presages The Woman in White, published two years later.

Thrilling reads in their own right, all 10 stories showcase Wilkie Collins's towering contribution to the development of the mystery genre.

Indeed, he is now regarded as the inventor of the modern detective story and the forefather of a crime fiction tradition that runs through Arthur Conan Doyle to Thomas Harris today.