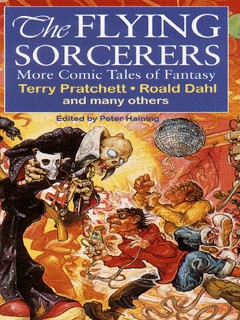 This sparkling sequel to WIZARDS OF ODD once again turns logic on its head with a galaxy of star writers and stories.

Terry Pratchett, the arch-priest of the genre, leads off with the eccentric figure of DEATH on new and curious mission, Roald Dahl plays havoc with country superstition, and Arthur C.

Clarke shows the funny side of cosmic doom. Add to these dazzling contributions from masters such as Kurt Vonnegut Jr., Angela Carter, C.S.

Lewis, P.G. Wodehouse and Michael Moorcock, and you have a blend of comic fantasy, supernatural extravaganza and sf that is almost literally in orbit.

The title of the book stems from the fact that many of the stories feature characters who can fly - either under their own power or by machines - or they simply run into trouble with aerial objects of one sort or another.

Bringing together some of the best fantasy available, THE FLYING SORCERERS is a gloriously bizarre, wonderfully varied collection of stories.