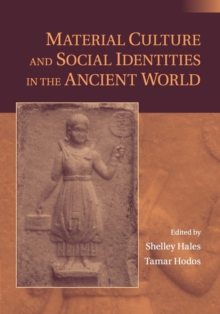 Material culture and social identities in the ancient world

Recent studies have highlighted the diversity, complexity and plurality of identities in the ancient world.

At the same time, scholars have acknowledged the dynamic role of material culture, not simply in reflecting those identities but their role in creating and transforming them.

This volume explores and compares two influential approaches to the study of social and cultural identities, the model of globalisation and theories of hybrid cultural development.

In a series of case studies, an international team of archaeologists and art historians considers how various aspects of material culture can be used to explore complex global and local identity structures across the geographical and chronological span of antiquity.

The essays examine the civilisations of the Greeks, Romans, Etruscans, Persians, Phoenicians, and Celts.

They also dwell on contemporary thoughts of identity, cultural globalisation and resistance that shape and are shaped by academic discourses on the cultural empires of Greece and Rome.