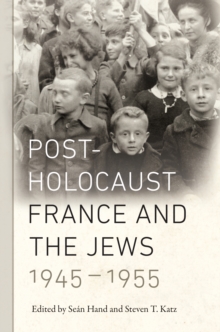 Despite an outpouring of scholarship on the Holocaust, little work has focused on what happened to Europe's Jewish communities after the war ended. And unlike many other European nations in which the majority of the Jewish population perished, France had a significant post-war Jewish community that numbered in the hundreds of thousands.

Post-Holocaust France and the Jews, 1945-1955 offers new insight on key aspects of French Jewish life in the decades following the end of World War II. How Jews had been treated during the war continued to influence both Jewish and non-Jewish society in the post-war years.

The volume examines the ways in which moral and political issues of responsibility combined with the urgent problems and practicalities of restoration, and it illustrates how national imperatives, international dynamics, and a changed self-perception all profoundly helped to shape the fortunes of postwar French Judaism.Comprehensive and informed, this volume offers a rich variety of perspectives on Jewish studies, modern and contemporary history, literary and cultural analysis, philosophy, sociology, and theology. With contributions from leading scholars, including Edward Kaplan, Susan Rubin Suleiman, and Jay Winter, the book establishes multiple connections between such different areas of concern as the running of orphanages, the establishment of new social and political organisations, the restoration of teaching and religious facilities, and the development of intellectual responses to the Holocaust.

Comprehensive and informed, this volume will be invaluable to readers working in Jewish studies, modern and contemporary history, literary and cultural analysis, philosophy, sociology, and theology.