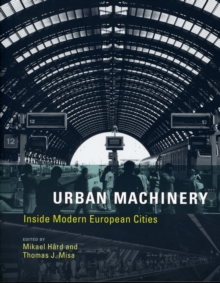 Part of the Inside technology series

Written by leading scholars from the history of technology, urban history, sociology and science, technology, and society, the book views the European city as a complex construct entangled with technology.

The chapters examine the increasing similarity of modern cities and their technical infrastructures (including communication, energy, industrial, and transportation systems) and the resulting tension between homogenization and cultural differentiation.

The contributors emphasize the concept of circulation-the process by which architectural ideas, urban planning principles, engineering concepts, and societal models spread across Europe as well as from the United States to Europe.

They also examine the parallel process of appropriation-how these systems and practices have been adapted to prevailing institutional structures and cultural preferences.

Urban Machinery, with contributions by scholars from eight countries, and more than thirty illustrations (many of them rare photographs never published before), includes studies from northern and southern and from eastern and western Europe, and also discusses how European cities were viewed from the periphery (modernizing Turkey) and from the United States. ContributorsHans Buiter, Paolo Capuzzo, Noyan Dinckal, Cornelis Disco, Pal Germuska, Mikael Hard, Martina Hessler, Dagmara Jajesniak-Quast, Andrew Jamison, Per Lundin, Thomas J.