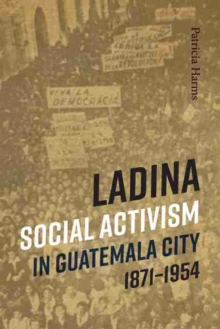 In this groundbreaking new study on ladinas in Guatemala City, Patricia Harms contests the virtual erasure of women from the country's national memory and its historical consciousness.

Harms focuses on Spanish-speaking women during the "revolutionary decade" and the "liberalism" periods, revealing a complex, significant, and palpable feminist movement that emerged in Guatemala during the 1870s and remained until 1954.

During this era ladina social activists not only struggled to imagine a place for themselves within the political and social constructs of modern Guatemala, but they also wrestled with ways in which to critique and identify Guatemala's gendered structures within the context of repressive dictatorial political regimes and entrenched patriarchy.

Harms's study of these women and their struggles fills a sizeable gap in the growing body of literature on women's suffrage, social movements, and political culture in modern Latin America.

It is a valuable addition to students and scholars studying the rich history of the region.