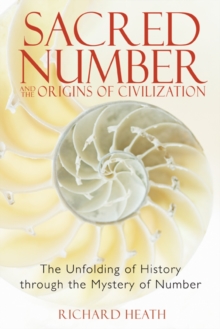 Sacred Number and the Origins of Civilization : The Unfolding of History Through the Mystery of Number

The ubiquitous use of certain sacred numbers and ratios can be found throughout history, influencing everything from art and architecture to the development of religion and secret societies.

In "Sacred Number and the Origins Of Civilization", Richard Heath reveals the origins, widespread influences and deeper meaning of these synchronous numerical occurrences and how they were left within our planetary environment during the creation of the earth, the moon and our solar system.

Exploring astronomy, harmony, geomancy, sacred centres and myth, Heath reveals the secret use of sacred number knowledge in the building of Gothic cathedrals and the important influence of sacred numbers in the founding of modern Western culture.

He explains the role secret societies play as a repository for this numerical information and how those who attempt to decode its meaning without understanding the planetary origins of this knowledge are left with contradictory, cryptic and, often, deceptive information. By examining prehistoric and monumental cultures through the Dark Ages and later recorded history, "Sacred Number and the Origins Of Civilization" provides a key to understanding the true role and meaning of number.