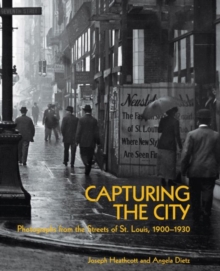 During the first two decades of the twentieth century, the St.

Louis Street Department generated one of the most extensive troves of photographs ever taken of the city.

Louis's photography operation expanded until it produced about six thousand images per year in 1914.

Many of these photographs were lost, but a city historian salvaged a collection of three hundred glass plate negatives in the 1950s, which are now in the Missouri Historical Society collections.

This small, but superb, group of photographs provides a wealth of information on the visual culture of St.

Louis during a period of rapid transformation. Capturing the City is the first book to examine these photographs, placing the people and landscapes depicted within the broader context of a swiftly urbanizing and industrializing metropolis. Collected and analyzed here by Joseph Heathcott and Angela Dietz, the compelling images in Capturing the City reveal the national trend among cities to use the camera as a documentary tool.

Reformers Jacob Riis and Lewis Hine imagined the camera as a truth-telling instrument and used their photographs to mobilize public consciousness.

Across the nation, cities used photographers to document slums, workhouses, and crime scenes, as well as municipal improvements like street lighting, pavement, and model housing.

In this vein, Holt and his staff showcased both the challenges and the successes of government action in St.

Louis. Consistent with their Progressive-era peers, their efforts contributed to the record of ongoing public works while shaping the narrative of urban progress itself.