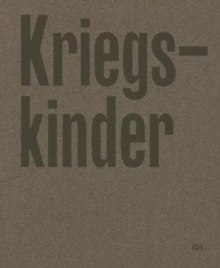 "What were my parents doing when they were as old as my son is today?

What made them what they are today?" These questions are examined by the photographer Frederike Helwig in her book Kriegskinder (Children of War).

People who were born in the late 1930s and early 1940s, who grew up during World War II, are now in their eighth decade of life.

They look back, some of them speaking for the first time ever about what marked them: bombs, fleeing, fear, hunger, illness, death, missing fathers, overwhelmed mothers-as well as the speechlessness of the post-war era, when memories of the war and its intergenerational consequences were supposed to be forgotten.

The forty-five haunting portraits-all of them taken recently with an analog camera-are contrasted with the narratives of childhood experiences told by eyewitnesses.

This makes Kriegskinder a portrait of a generation whose memories will soon disappear with them.Exhibition: 2.2.-8.4.2018, f(3) - freiraum fur fotografie, Berlin