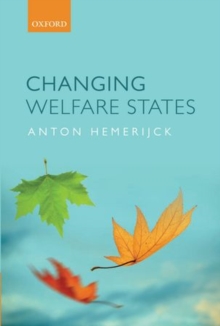 By: Hemerijck, Anton (Professor of Institutional Policy Analysis at VU University Amsterdam and Centennial Professor of Social Policy at the London School of Economics.)

Changing Welfare States is is a major new examination of the wave of social reform that has swept across Europe over the past two decades.

In a comparative fashion, it analyses reform trajectories and political destinations in an era of rapid socioeconomic restructuring, including the critical impact of the global financial crisis on welfare state futures.

The book argues that the overall scope of social reform across the member states of the European Unionvaries widely.

In some cases welfare state change has been accompanied by deep social conflicts, while in other instances unpopular social reforms received broad consent from opposition parties, trade unions and employer organizations.

The analysis reveals trajectories of welfare reform in many countries thatare more proactive and reconstructive than is often argued in academic research and the media.

Alongside retrenchments, there have been deliberate attempts - often given impetus by intensified European (economic) integration - to rebuild social programs and institutions and thereby accommodate welfare policy repertoires to the new economic and social realities of the 21st century.