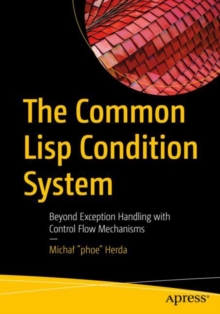 Discover the functioning and example uses of the Common Lisp condition system.

This book supplements already existing material for studying Common Lisp as a language by providing detailed information about the Lisp condition system and its control flow mechanisms; it also describes an example ANSI-conformant implementation of the condition system.

In part 1 of The Common Lisp Condition System, the author introduces the condition system using a bottom-up approach, constructing it piece by piece.

He uses a storytelling approach to convey the foundation of the condition system, dynamically providing code to alter the behavior of an existing program.

Later, in part 2, you'll implement a full and complete ANSI-conformant condition system while examining and testing each piece of code that you write. Throughout, the author demonstrates how to extend Lisp using Lisp itself by using the condition system as an example.

This is done while paying proper attention to the CL restart subsystem, giving it attention on a par with the handler subsystem.