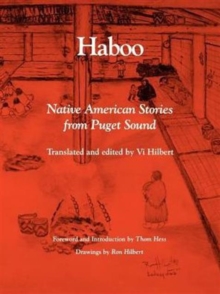 The stories and legends of the Lushootseed-speaking people of Puget Sound were an important part of the oral tradition by which beliefs, values, and customs were handed from one generation to another.

Vi Hilbert, a Skagit Indian, grew up at a time when many of the old social patterns survived and when everyone still spoke the ancestral language.

As an adult, when she realized that native language and culture were being forgotten, she began to work with linguists and anthropologists in recording and translating as much of the Lushootseed oral tradition as possible.

Haboo is her collection of thirty-three stories. Most of the stories in the book take place in the Myth Age, before the world was transformed.

Animals, plants, trees, and even rocks had human attributes as well as the characteristics we know today.

Characters included Wolf, Salmon, and Changer, who made things the way they are now.

Especially prominent are Mink, Raven, and Coyote--three tricksters who are usually caught in their duplicity but who can occasionally rise to heroic deeds.

Other worlds exist--the sky world, the Salmon People's world--and it is possible to walk from one to another.

Many of the stories are light, humorous, and earthy, reflecting the foibles of human nature.

While a serious moral is usually implied, instruction is achieved by humorously detailing the unfortunate, even disastrous consequences of breaking taboos. In his Introduction, Thom Hess, professor of linguistics at the University of Victoria, places the stories in the context of the Lushootseed world view.

Vi Hilbert in her Preface describes the storytellers, many of them relatives and older friends with special knowledge of the old ways. The vivid and humorous stories in Haboo will be of interest to linguists, anthropologists, and folklorists, as well as to future generations of Lushootseed people and all others concerned with native languages and cultures.