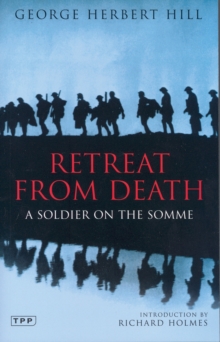 Retreat from death : a soldier on the Somme

"I was alone in a world gone mad. Death was all around...Useless, filthy death." At 2 o'clock on the morning of 21 March 1918, the Battle of St Quentin began.

The German assault, consisting of trench mortars, mustard gas, chlorine gas, tear gas and a heavy artillery bombardment, was said to be one of the most fierce and devastating of the Great War.

Over the course of 6 days, thousands of British troops lost their lives and yet this would prove to be the turning point of the war - the end was in sight.

George Hill was just sixteen when he enlisted into the army, eager to fight for his country and full of pride for the role he would play.

After only a few weeks in France, he was in the midst of St Quentin and the full horrors of trench warfare.

Incredibly, he survived - one of the few members of his battalion to do so.

After several months at the front, he was gassed and spent the last days of the war in a field hospital.

Hill turned 19 on the day of the armistice. "Retreat from Death" is the harrowing story based on his experiences.