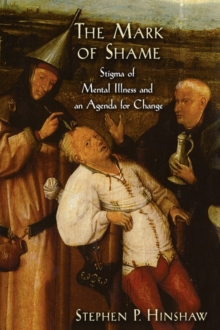 The mark of shame : stigma of mental illness and an agenda for change

Millions of people and their families are affected by mental illness; it causes untold pain and severely impairs their ability to function in the world.

In recent years, we have begun to understand and develop a range of effective treatments for mental illness.

Even with this shift from moralistic views to those emphasizing the biological and genetic origins of mental illness, punitive treatment and outright rejection remain strong.

Public attitudes toward mentalillness are still more negative than they were half a century ago, and the majority of those afflicted either do not receive or cannot afford adequate care.

As a result of all of these troubling facts, applying the term "stigma" to mental illness is particularly appropriate because stigma conveys themark of shame borne by those in any highly devalued group. Mental illness tops the list of stigmatized conditions in current society, generating the kinds of stereotypes, fear, and rejection that are reminiscent of longstanding attitudes toward leprosy.

The pain of mental illness is searing enough, but adding the layer ofstigma affects personal well being, economic productivity, and public health, fueling a vicious cycle of lowered expectations, deep shame, and hopelessness. In this groundbreaking book, Stephen Hinshaw examines the longstanding tendency to stigmatize those with mental illness.

He also provides practical strategies for overcoming this serious problem, including enlightened social policies that encourage, rather than discourage, contact with those afflicted, media coverage emphasizing their underlying humanity, family education, and responsive treatment. The Mark of Shame is a deeply inspiring and passionate work that is realistic and filled with hope.

It combines personal accounts with information from social and evolutionary psychology, sociology, and public policy to provide messages that are essential for anyone afflicted or familiar with mental illness.