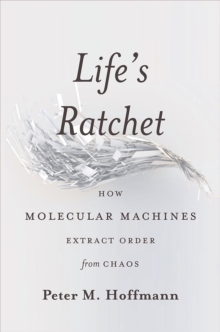 Life is an enduring mystery. Yet, science tells us that living beings are merely sophisticated structures of lifeless molecules.

If this view is correct, where do the seemingly purposeful motions of cells and organisms originate?

In Life's Ratchet , physicist Peter M. Hoffmann locates the answer to this age-old question at the nanoscale.Below the calm, ordered exterior of a living organism lies microscopic chaos, or what Hoffmann calls the molecular storm,specialized molecules immersed in a whirlwind of colliding water molecules.

Our cells are filled with molecular machines, which, like tiny ratchets, transform random motion into ordered activity, and create the purpose" that is the hallmark of life.

The cell is like a city,an unfathomable, complex collection of molecular workers working together to create something greater than themselves.Life, Hoffman argues, emerges from the random motions of atoms filtered through these sophisticated structures of our evolved machinery.

We are agglomerations of interacting nanoscale machines more amazing than anything in science fiction.

Rather than relying on some mysterious life force" to drive them,as people believed for centuries,life's ratchets harness instead the second law of thermodynamics and the disorder of the molecular storm.Grounded in Hoffmann's own cutting-edge research, Life's Ratchet reveals the incredible findings of modern nanotechnology to tell the story of how the noisy world of atoms gives rise to life itself.