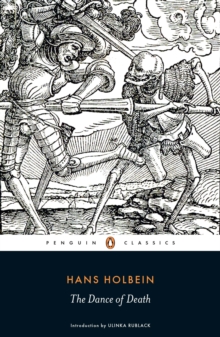 The dance of death

'The underlying message of the series is, of course, that Death comes for us all, and if it interrupts the recreations of the wealthy rather more insolently than those of the poor, then let that be a lesson to us' Nick Lezard, GuardianA new departure in Penguin Classics: a book containing one of the greatest of all Renaissance woodcut sequences - Holbein's bravura danse macabreOne of Holbein's first great triumphs, The Dance of Death is an incomparable sequence of tiny woodcuts showing the folly of human greed and pride, with each image packed with drama, wit and horror as a skeleton mocks and terrifies everyone from the emperor to a ploughman. Taking full advantage of the new literary culture of the early 16th century, The Dance of Death took an old medieval theme and made it new. This edition of The Dance of Death reproduces a complete set from the British Museum, with many details highlighted and examples of other works in this grisly field. Ulinka Rublack introduces the woodcuts with a remarkable essay on the late medieval danse macabre and the world Holbein lived in.