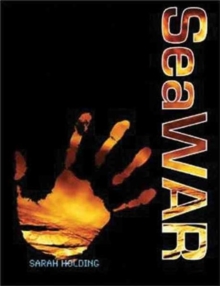 SeaWar - Book 2 of the SeaBEAN Trilogy

The mysterious black C-Bean is a remarkable device which, as Alice and her classmates discovered in SeaBEAN (the first book in The SeaBEAN Trilogy), knows just about everything and can take them anywhere in the world. But now it's broken and stranded on the rocks on the remote Scottish island of St Kilda.

When Karla Ingermann, the C-Bean's designer, turns up from Germany to try to fix it, they perform a factory reset, which accidentally sends it back in time, and Alice's world is thrown into disarray.

Chased by Victorian police, attacked by an enemy submarine, imprisoned with a madwoman, summoned to rescue a dying pilot and fired at by government agents, Alice, together with her parrot, her dog and her new wartime companions, embarks on a journey through time, uncovering dark secrets from St Kilda's past and safeguarding the future before it's too late.