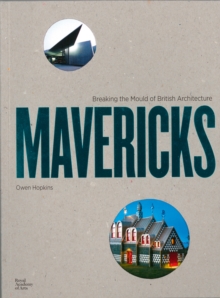 Mavericks : architects who broke the mould of British sculpture

The history of architecture is a story of continual innovation, and yet at certain points within that story comes an architect whose vision completely defies convention.

Mavericks: Architects who Broke the Mould of British Architecture focuses on twelve such figures from the history of British architecture, including Sir John Soane, Charles Rennie Mackintosh, Cedric Price and Zaha Hadid. From the stripped-back classicism of Soane's Dulwich Picture Gallery to Hadid's neofuturistic Olympic Aquatics Centre in London, their work is bold, frequently controversial, often radical; it is architecture that actively resists being pigeon-holed into a particular style or period.

What connects this naturally disparate group of free creative spirits is the way each has charted their own course, often deliberately evading conventions of taste, fashion and ways of working.

This book will offer a fresh take on their work, establishing new and sometimes surprising historical connections, while posing an intriguing alternative narrative to the history of British Architecture.